Discuss the Urgent Need to Focus on Fixing our Health Care System, Not Tear it Apart

STATEN ISLAND – Today, members of the New York State Nurses Association (NYSNA) gathered in front of Borough Hall to endorse Max Rose, the Democratic Congressional nominee for NY-11 and discuss the urgent need to focus on fixing the country’s health care system rather than tear it apart.

“The nurses of the New York State Nurses Association, many of whom either work or live in the district, are very proud to endorse Max Rose. He has a keen awareness of the health care needs of the communities he will serve and will fight in Washington to preserve funding for health care, with special regard for the under-served. Max Rose understands the critical importance of the battle being waged to support equality in health care services,” said Pat Kane, RN, NYSNA Treasurer.

“The Republican plan for health care wouldn’t lower costs and it won’t expand coverage. It would only gut Medicare, Medicaid, and protections for pre-existing conditions. We cannot sit on the sidelines when our health care is on the ballot.” said Max Rose. “Dan Donovan voted against more doctors for our hospitals, more funding to combat the opioid epidemic and to repeal pre-existing protections seven times. I have worked in health care. I know how to cut waste and deliver better care for the American people. It’s time to get to work, and I can’t wait to do so with the Nurses who are the backbone and heart of our health care system.” 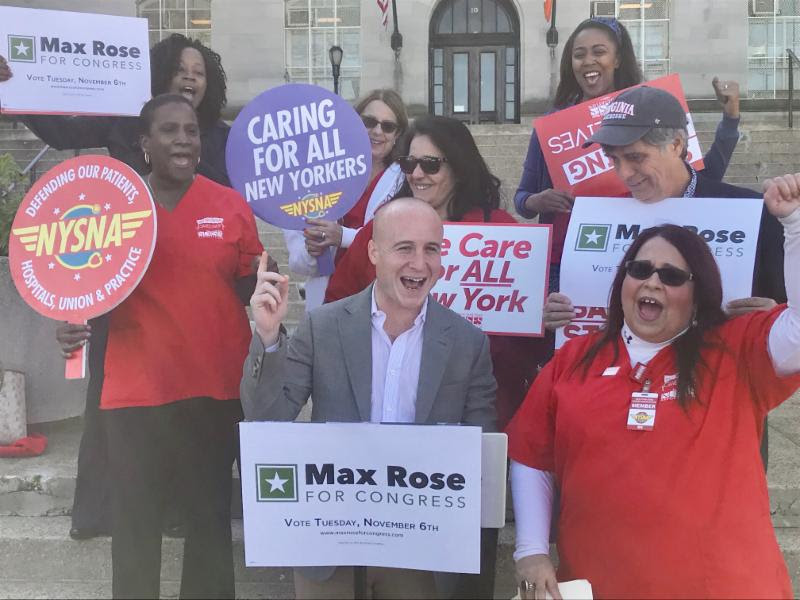 NYSNA’s endorsement comes two days after Max Rose revealed that incumbent Dan Donovan voted against the CREATES Act, a bill that would have increased competition in the prescription drug market and significantly lowered our prescription drug prices. The bill was co-sponsored by Ted Cruz and Rand Paul and was supported by committee staff in both chambers. However, between January and March of 2018, the largest drug lobby group in America spent $10 million to fight against the motion and successfully eliminated bipartisan support. In breaking their own record for the most spent in a single quarter, Big Pharma stalled a bill that was intended to increase competition among generic and branded drug manufacturers.

NYSNA is a union of 42,000 frontline nurses standing together for strength at work, their practice, safe staffing, and healthcare for all. They are New York’s largest union and professional association for registered nurses.

The endorsement of NYSNA comes after an outpour of support from other local unions including CWA, 1199 SEIU, 32BJ, United Auto Workers, The New York State Council of Machinists, The RWDSU, The United Service Workers Union


Paid for and Authorized by Max Rose For Congress